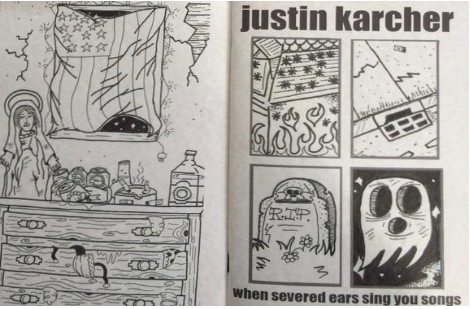 I remember the first poem I ever heard the author read. It was entitled, “Take off Your Clothes and Walk Into the Arthropod Wildfire.” The title alone is a poem and the poem is one of my favorites in When Severed Ears Sing You Songs.

Every poem possesses a unique set of imagery unlike any work I have ever read. The chapbook was released on February 2017 and many people in the Buffalo community, and even outside of it, were excited upon the release. As a writer/poet myself, this work has been a huge influence towards my own, along with much of Justin’s brilliant masterpieces.

Each poem is part of something much more significant than a chapbook of verse. This work is composed of collected confessions that paint distorted portraits of one man’s journey. Karcher bridges a gap between the aesthetic love/hate relationships between him and the city of Buffalo.

His words take the reader on an epic adventure through the Rust Belt calamities of a man trying to live more than a mundane existence. I am sure just as I am writing this piece my words may bring about poetic imagery.

However, this is a testament to the sheer power of this work. Aside from the poem mentioned at the start of this review, there are two poems I really wanted to praise (and it took forever to decide just picking two to discuss).

The first is “And the Rust Belt is Crying Tears of Fire” (Boston Accent Lit, Issue 1). In just one page, it felt like opening a post-modern parcel trapped in a bottle. It was like reading a 21st century soliloquy of one man’s quest through the toxic jungles of Buffalo’s bar scene. There are drops of mysticism laced in every word.

“…The crust punks have crawled back into cans of PBR to hibernate
I’ll rub down cheap beer until dreadlocked genies refuse my wishes
At this point, walking into Essex feels like
I’m walking into King Tut’s Tomb
I know I’m going to unearth something
But there’s still a big chance it will confuse the hell out of me…”

(When Severed Ears Sing You Songs, 8)

The second is “Elegy for the Man who Almost Cracked My Jaw” (Foundlings Zine). A ‘creature-feature’ depiction of the monster our grief can turn us into. Whether it’s a “beast with two backs” or voracious carnivore bent on the destruction of other objects, because an even worse alternative coping mechanism is self-destruction. Justin unleashes the powerful entity of mourning and its tombstone is a cloud over the downtown Buffalo skyline.

(When Severed Ears Sing You Songs, 18)

The work, in every way, is masterful. It is a collision of two powerful forces; experience and imagination. A documentary and a fantasy wrapped into the pages of one’s own struggle with pride for both their city and their self.

Each page is a paper-cut to the psyche and smothers its reader with the breath of a storyteller’s rumination. If you want words that can paint pictures into the canvas of your mind, here it is, a work of self-reflective art.

You can checkout this incredible book at https://www.cwp-press.com/bookstore/when-severed-ears-sing-you-songs