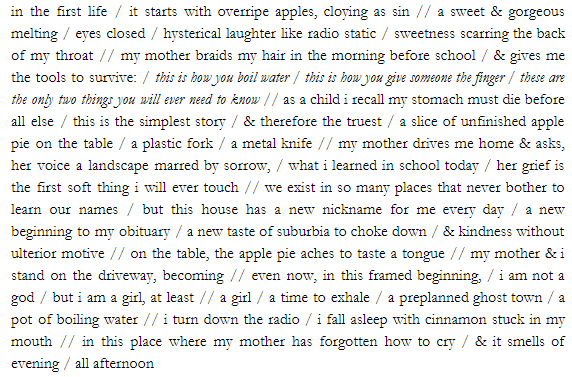 Topaz Winters is a poet, essayist, editor, creative director, speaker, actress, & multidisciplinary artist. Among her internationally award-winning & critically-acclaimed creative credits include working as the author of three books (most recently poems for the sound of the sky before thunder, Math Paper Press, 2017), writer & star of the short film SUPERNOVA (dir. Ishan Modi, 2017), creative director & editor-in-chief of Half Mystic Press (est. 2015), speaker of the TEDx talk Healing Is a Verb (2017), & creator of the digital art installation Love Lives Bot (est. 2018). Her work has been published in Cosmonauts Avenue & DIALOGIST, profiled in The Straits Times & The Business Times, & commended by Button Poetry & the National YoungArts Foundation, among others. She is the youngest Singaporean ever to be nominated for the Pushcart Prize. She was born in 1999, resides at topazwinters.com, & studies literature & film at Princeton University. She enjoys chai lattes, classic films, wildflowers, & the colour of the sky when nothing is dreaming of it.